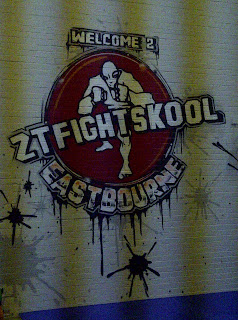 Its a great thing to see hard work and dedication result in something as amazing as the new ZT Fight school where my bjj coach Tolly is now located.
Those of you who have followed my blog for a while can track how much bjj in Eastbourne has progressed in such a short space of time.

Tolly started teaching BJJ at canton martial arts when I returned from a months training at Tiger Muay Thai in Phuket, it was there I got bitten by the grappling bug and had made up my mind that I had to master BJJ.
I didn’t realise at the time what a bold statement that was or how many hours of intense training were ahead of me, it was just a feeling I had at that moment in time and I felt driven to achieve it.

I kind of think of it as fate looking back as low and behold our school had managed to acquire a bjj coach, I wondered where they had spirited him from as Eastbourne is a small place. The class attracted a range of students, some who had a basic knowledge of grappling but for the majority a pack of uncoordinated and unconditioned novices who Tolly had the challenge of teaching the complicated art of bjj to.

Class was only 3 times a week but it developed a cult following with Tolly's friendly and expert coaching style and personality proving the key behind the groups quick progression. It was not too long before some of us became regulars on the competition scene going up against some of the bigger longer established clubs and often bringing back medals for our efforts.

I had a great introduction to BJJ and I can attribute all my initial success to having this great group of people to train with, we didn't have the best facilities or training available on tap like some of the bigger gyms but it just shows that quality of training can often prove more effective than quantity and having a good coach can make all the difference to your experience and confidence when learning a new skill.

After about a year of training every ones efforts were rewarded when we had our first grading with many students that had been there from day one receiving their blue belts. It was at this point that I left the UK and went to stay with my dad for a year in Bahrain

While I was away efforts continued back in Eastbourne with Tolly always having the ultimate goal of having a permanent location that would be a solid base for everyone and allow more regular training.
He continued to train hard in BJJ and developed an interest in MMA training at Zt fight school in Brighton and his profile was raised after a number of victories at well established ZT fight nights.
Not only focusing on his success he continued to help his students to achieve their goals with many having had victories in MMA.

This success helped to push things to the next level and saw Tolly move to a part time location at fitness first where the second grading was hosted with a huge turn out of students and continued support from Brazilian top team Black belt Ze Marcello.
His hard work was also rewarded when he received his brown belt from Ze Marcello and became afficliated with Icon BJJ. All the while the final pieces were being put into place. First generation BJJ was born and ZT fightschool opened their doors in Eastbourne.

When I saw the new club for the first time I was blown away not only by the amazing facilities but by what Tolly had actually managed to achieve in terms of taking a sleepy town like Eastbourne and putting it on the map as a hotspot for up and coming talent in all areas of combat. There are so many good fighters at the school but it also attracts people who just want to improve their fitness and enjoy martial arts. Due to the positive attitudes and the way in which the club developed this is something that can coexist with everyone feeling they are part of the club regardless of age gender or ability and its an atmosphere that is often missing from some clubs.

T thanks Sol Gilbert and all the guys at Zt, Ze, students friends and sponsers that have made everything a possibility

Facilites include cage, boxing ring, large matted area and strength and condidioning equiptemnt
Classes in BJJ MMA submission wrestling Kick boxing, taekwondo, boxing with more to be being added all the time. Ladies only and kids/youth and gym membership also available.
For more information about classes and membership you can call Tolly on 07707541535

Or if you want to check of some of the talent at the next fight night you can grab tickets on the ZT website
http://www.ztfightskool.com/hove/