Well I have been back for a month now and training is going well. Haven't updated in a while which is rubbish seeing as all I have been doing in training due to lack of job! Anyways as we have a couple new teachers over from Brazil class times have changed to 2 hours at night from 7-9 and 1 hour in the morning from 10-11. My schedule has been looking somethings like this.

Saying that I missed yesterday completely as I was tired and decided to take the guys out on the boat in the afternoon, so I crashed out early and slept through no gi training. My new Brazilian friends have labelled it with great amusement "vagabond style" As i still have no job and have just been training and showing them round Bahrain.

In other news I started doing capoeira, as we have a new teacher called Luciano who pretty much just defies gravity. I have been so focused on bjj that I thought it would be good to mix things up and try capoeria while I have the chance. The first class is a blur and I didn't really have a clue what was going on, my brain is defiantly more wired for fighting on the ground! We started by doing a warm up which included jumping over and ducking under some kind of stick and lots of stretching then he taught the basic stance or ginga position and worked on attack and defence from there. By the second class I was starting to pick up on some of the names and actually realise what was going on a bit more, this class we worked on handstands and headstands, headstands i can do but handstands still need a bit of work! I found it a bit more easy to get the rhythm when we were sparing at the end. I'm really enjoying the class so far I like the music played on the berimbau which is like a huge bow, the class gives me a completely different energy than bjj, for now I'm doing 3 classes a week but I'll see how it goes after a month I might start doing more. 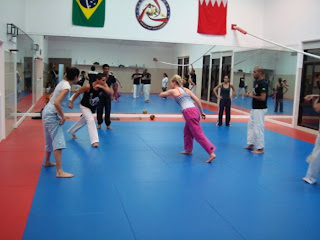 Posted by XOXrachyXOX at 03:02 No comments:

I'm happy that my birthday and christmas are coming up - if anyone is wondering what to get me I really like this gi!- Tried on the new vulkan light weight and the fit is great and are really good quality. If anyone is looking for one you can get them from budovideos website (link under womans training gear) they deliver super fast, I was impressed when my friend ordered one and it found its way to Bahrain in a matter of days! Oh and I just read Georgette (see my blog roll) has ordered one and is going to review it so I'll be looking forward to reading that! 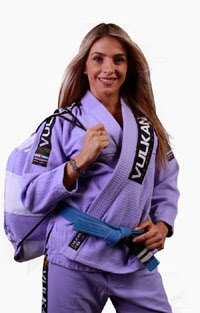 Posted by XOXrachyXOX at 11:58 No comments:

As this part of my game is lacking quite a bit I decided to get my ass into gear and start working on the standup part of my game. There are loads of different techniques and approaches to take the match to the floor in BJJ. Very broadly speaking there are 2 options, one is to pull a form of guard and therefore commence the fight from this position to work on sweeps or submissions. The second is working to get a takedown or throw and ending up in a dominant position usually in side control or mount. In all of my fights I have used some kind of takedown or throw, or someone has pulled guard on me.

I guess so far I have been lucky as to be honest I never had a particular throw or takedown in mind I usually ended up countering my opponents move when I felt them off balanced. So I browsed online for a good DVD to get me inspired and ordered "Brazilian jiu jitsu - techniques and tactics volume one throws and takedowns"

The dvd is presented by master Marcus vinicius di lucia, and is very well organised. It begins with a number of judo throws divided into legs hip and arm throws. Once you watch the dvd a few times and start to remember all the traditional judo names for things you can then watch the section on combination and counter throws which starts to get your brain ticking a bit more on not just how to attack with only one option but know how to respond to your opponents response and use this to your advantage. The last section is on takedowns which I have never really enjoyed probably because they often involve alot of explosive strength and changing levels to shoot in which I don't mind in no-gi but tend to steer clear of in bjj as I'm usually with heavier people and have more luck with throws. However we have been drilling lots of takedowns at rezas so maybe I will start to get the hang of them a bit more.

I would defiantly recommend this DVD for white and blue belts, it helps you to feel a bit more confident regarding your standup which is often where people seem to have the biggest problems. It also includes a bonus section with some good stretches and a quick cardio workout. So far I have managed to successfully switch between the leg throws O soto gari and o uchi gari

Posted by XOXrachyXOX at 07:57 No comments: