The cage door closes and two mixed martial artists stand in front of each other. There's a palpable tension before the referee signals the start of the fight; the training is over and now it's down to the athletes to perform. Will there be a knock out? Submission? Or maybe a gruelling three round decision? Either way; to compete at the highest level of this sport you've got to be a pretty tough guy.

It's an indicator of the rapid rise in popularity of female mixed martial arts. Fighters like Olympic judo gold medallist and current Strikeforce 135lb champ Ronda Rousey have paved the way for women's combat sports. America even has a female-only MMA promotion, Invicta FC, which is gearing up for its third event after its first two successful shows.

But, back to the UK, last night's event was organised in aid of domestic abuse with all proceeds going to Victim Support. The event was made possible from various volunteers from the MMA community and served to showcase what a positive force the sport can be.

The event kicked off with a Kenjitsu demonstration from multiple world martial arts champion Rubie Planson who later said, “it’s been great to be part of this event, I think it will really open doors for women in martial arts.”

www.lutadora.co.uk was at the event with female fight brand FighterGirls. Emmaline Francis, a fighter competing in an MMA exhibition match was sporting FighterGirls shorts. “It’s amazing to be part of this event, I wouldn’t miss it for the world,” she said. “I love the FighterGirl gear.”

At no point did the fight card disappoint: from the heated brawling in the white collar boxing matches to the more technical K1 striking, and from the tough three round battles to the clinical submissions each fight was exciting in its own right. It goes to show these women are fighters and no matter what you think about female combat sports, they’re here to stay.


Have a look at all the great pics from the night too! 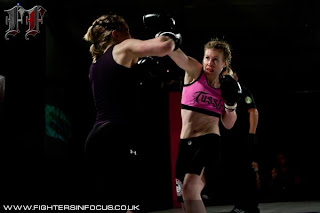