After going to the UK I realised how much I miss being able to train with soph and do things like ladies open mat, so I'm hoping that I can inspire ladies in Bahrain and the Middle East to give Brazilian JiuJitsu a try! If your reading this and don't have the faintest idea what BJJ is or what a typical class would involve then don't worry, when I first started I didn't have a clue what I was doing and had a very limited experience of martial arts hopfully this post will help you to gain a better understanding.

What is Brazilian Jiujitsu (or BJJ for shorts)
Brazilian jiujitsu was developed as a means of self defense against larger stronger individuals. The aim is to get the fight to the ground using a throw, takedown or pulling gaurd (see in the video how pippa (blue gi) pulls gaurd on leoni). Once the fight is taken to the ground you will need to reach a dominant position from which you will try to make your opponent submit or tap by applying a choke or joint lock (at the end of the video leoni successfuly reaches the mount position and manages to pass pippas defenses and get an arm bar submission making pippa tap out and winning the fight). 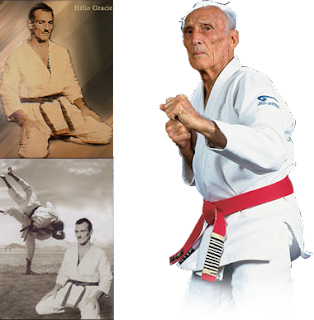 Helio gracie, who developed the art of bjj, was a small guy and would have been unable to successfuly beat bigger stronger opponents if he relied only on strength.

Many of you may feel more comfortable practising standing martial arts such as karate, taekwondo or kickboxing as the actions of punching and kicking are more familiar, bjj may seem daunting as it focuses on fighting an opponent from the ground and you may not understand the complexity of what is going on when watching people wrestling for the first time. However don't be put off by the unfamiliarity, Bjjs advantage is that smaller weaker opponents can develop the skills of leverage, positioning and working with momentum to defend and attack bigger stronger individuals. For this reason it makes it an excellent form of self defense as it lets you develop a sense of control and co-ordination needed to protect your self if you are ever thrown to the ground.

What will a typical class involve?
Class will usually begin with a warm up which can sometimes include specific condidioing drills to improve fitness. The coach will then show a few techniques whereby people will partner up and practice these positions. If your new your first class will usually involve going over some of the basic positions with the coach or one of the more experianced students, so don't panic about getting thrown in at the deep end, there will be plenty of help available and you can go at your own pace. After a you have become more familiar and condfident with some of the basics you can put what you've learnt into practice by rolling (another term for wrestling or grappling) with your training partners. The aim here is not to kill each other or see who is the best but simply pracice and develope your technique when under a bit of pressure.

The Benefits Of BJJ
Like all martial arts bjj can help to boost your confidence and self esteem by making you feel you have a greater sense of the capabilities of your body. Training regularly can improve your physique in two ways. 1) Grappling has a high energy demand meaning a large number of calories are burnt when training which can assist in reduced body fat. 2) Grappling also helps to develope lean body mass (mucles) which increases your metabolic rate, which is the best way to maintain a healthy weight in the long term. When i started BJJ i Couldn't do even half a push up and weighed about 67kg after about 6 months of training 3 times a week my weight had done down to 60kg and I can now happily rep out real push ups with the guys. I also compeated in a number of tournaments and felt more confident. Training gave me the chance to meet new people and be sociable in a healthy environment, it made a change of scene from the constant partying I had been doing at uni.

I hope this has helped some of the ladies to see that BJJ is a great martial art to learn and one that woman can really excel in. Don't be put off if the class is full of big grunting men, most of them will not be phased by your presence and go out of their way to make you feel welcome and help you out. Don't just take my word for it check out a whole host of other blogs by female authors that love jiujitsu at http://bjjgrrl.wordpress.com/women/women-resources/

If your in Bahrain and are interested in starting a class check out Reza's martial arts accadamy there are classes 6 days a week 10am-11am then 7-8.30pm its located in Sar/diraz I will post a map soon! I would also be interested to hear from any females training in or near Bahrain i.e abu dabi, dubai qatar, kuwait, and hear some of their experiances on training out here so leave a message if you or anyone you know wants to arrange a womans only training session like the ones going on in America, stockholm and the uk.

Just a quick post :) Primark have some t-shirts that are quite good for training they are long, stretchy and have a high neckline, there are a whole range of colors to chose from, I got pink blue black and green. I get one size smaller than usual so its extra tight. At 2 quid a pop they have to be my bargain buy of the holiday, If you want to be even more economical then you can wear your normal t shirts backwards so they are more bjj friendly!

If your feeling like spending a bit more cash then I love the tatami rash guards, they are tight and don't make me feel like I'm being strangled. Some of the other rashgurds for females are such a thick material and better suited for surfing. They are available in pink and black and cost reasonable 10 pounds (some rash-guards can cost up to 40quid!)steel 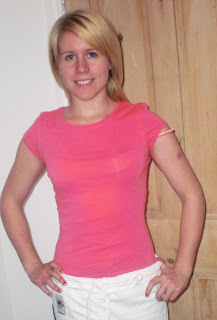 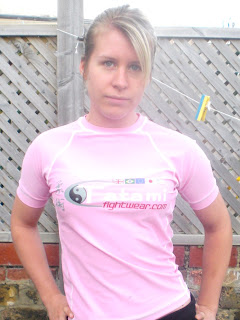 Posted by XOXrachyXOX at 12:21 No comments:

Back in the UK!

Well I'm having a quick holiday back home, it started with a 7 hour flight via Doha 1 night in London then off to my aunt's 25th wedding anniversary, which, for a huge family event went down without any drama or scandal as can be the norm when my family are all contained in one place. Amazingly my nanny wasn't wearing anything covered in sequins or from topshop, my crazy aunt managed to avoid seducing any of my cousins friends the underage drinkers did so responsibly, and the dinner was yummy. I am somewhat worried that with an average of 3.5 puddings a day and an extremely large Scottish cooked breakfast that i will go back to Bahrain a kilo or 2 overweight so when i got back to eastbourne i stocked the fridge up with everything healthy and wholesome my chocolate detox begins now!

Back to BJJ, I went training at canton last night, I was a bit nervous but once I saw all my old friends I had a great session. We started off with a quick warm up maybe ten minutes compared to the half an hour at reza's which considering my numb feet made me very happy. We then drilled 5 different take downs 20 times each including a 3 judo take downs which i can never remember the name and 2 single leg take downs. Tolly let me do the stretching and I threw in a few yoga moves which was met by a lot of grunting haha i love me some stretching. I really liked the moves we drilled, I had nearly forgotten all the attacks I knew from side control so it was great to go over some and fun to have Sophie back to drill with. What was even nicer was having a good 5 rolls at the end it was good to test some of the stuff I had learned at reza's with the guys here, although I was so excited that my usual slow and steady approach was replaced with wild all out combat!

I am very tempted to go to slough tonight and see all the guys from BTT but i think my mum would kill me, and I want to go see Anna and check out her gym in Worthing on Thursday so tonight I think I will go for dinner with her and my brother in Brighton. I'm even more tempted to stay a bit longer but I need to get my ass back to Bahrain and work so I will try to enjoy every minute of my hols and squeeze in as much bjj time as possible!
Posted by XOXrachyXOX at 01:48 No comments: