Strikeforce WMMA Riled up by Rousey

I sometimes read the stats to see who has been checking out my blog, and its always interesting to see the range of countries that it has been viewed in.
I got an email out of the blue from an old friend that I had lost contact with who said that one of his friends was telling him about my blog from all the way in Australia.
I can sometimes be a bit crappy about keeping in contact but its nice to know I'm not rambelling to cyber space unheard, and it was good to catch up with someone from the past.

Has anyone else been following the twitter wars in the woman's MMA scene over the last few weeks?
Ronda Rousey, an Olympic judo medalist who has recently crossed over into MMA has been causing controversy and in her own words "getting the woman riled up"
Interest in her was sparked after she won all 4 of her pro fights in under a minute into the first round via armbar submission.
Her success didn't come without controversy as Sarah D'Alelio claimed to not have tapped from the armbar. These allegations made sure Ronda would not be letting go of a submission unless as the old saying goes her opponent tapped or snapped.
Unfortunately for Julia Budd, Rouseys latest opponent, this is exactly what went down, in an attempt to roll out of the armbar Buds arm was painfuly broken at the elbow.
After another impressive victory Rousey announced her intentions to drop to the 135lb weight class, calling out the current champ Miesha Tate for a shot at the title. Some would say this was a bold request to make after only 4 fights, especially as giving her a shot at Tate would mean Rousey skipping past fighters who had already worked their way through the 135lb division, claims were made over twitter that she should "wait her turn".
The call out had female fighters up in arms as to weather it was fair that Rousey be able to get a title shot in a category she had yet to prove herself in. The publicity and interest in the conflict lead to a double interview between Tate and Rousey on MMA hour with Ariel Helwani. Rousey took a direct approach stating that a fight between her and Tate would make the most sense from a marketing point of view.

Rousey's comments were probably more thought out that they seemed, I think it was her intention to act the cocky new comer and tempt Tate into a fight that her common sense probably wouldn't agree to. Interestingly the conflict has sparked even more of a dispute between not only Tate and Rousey but also the fighters such as Sarah Kaufman who would miss out a chance at a rematch against Tate if Rousey got her way.
I know my coaches wouldn't let me take a fight like that, Tate worked hard to get the title, it would make more sense for her to see how Rousey copes against some good fighters in the 135lbs category first.
I can see why Rousey is pushing it as she has nothing to lose 4 fights in, and remaining in the 145lb category where the cream of the crop includes the likes of Chris Cyborg, mean it makes sense for Rousey to go for gold in the 135lb category while she has a buzz surrounding her.

It may not be fair what Ronda is trying to do and as a Brit I'm inclined to get ticked off when someone tries to queue jump, however whatever fights happen next in WMMA are going to be a lot more interesting now that there is more of a story behind the match ups.
Posted by XOXrachyXOX at 17:09 2 comments:

After watching all my friends kill it on UCMMA contenders in Brighton I was feeling some what sulky that I didn't get to fight.
Despite contenders not happening I had been keeping up my training, even though it wasn't looking likely I would have anyone to fight on our next fight night either.

My new found love of twitter (I know took me long enough) meant I was even more restless and psyched up to fight after following the uproar that Ronda Rousey caused by calling out Miesha Tate for a shot at the 135lb title.
"Sigh" it seems life isn't as interesting when you don't have a fight or competition to focus training around.

Randomly my friend Tanya who I fought way back in March asked me if I wanted to step in last minute for a title fight at Battle arena in Northampton.
I was in London doing my exercise to music training day and in the middle of making a "just because we can" chocolate cake with my cousins.

I text my coaches to see what they had to say and both Paul and Tolly seemed up for it if I put in the hard work.
I would like to say that I didn't scoff a huge slice of chocolate cake inducing a sugar high of excitement that was followed by a series of rocky style pose downs in mirror but yeah that totally happened.

We killed it in training for 5 days working everything, Tolly is particularly ruthless when it comes to being fight ready.
Sunday came around really quickly, I weighed in at 3pm at around 60.5kg my opponent was around 2kg heavier but we had been expecting that. Had the standard pre-fight meal of nando's quarter chicken medium, chips and garlic bread, coconut water, then a smoothie and some fruit and a couple lucozade sports.

As it was a title my fight was 19th so there was a long wait in the changing rooms, I had my book "the night watch" to keep me distracted, but overall I was feeling pretty good about the fight.
It was three 4 minute rounds, and my first time doing head shots on the ground. I think from the crowds reactions that they enjoyed the fight, and it was stopped in the third round via ground and pound.

All the excitement has meant I am now back on nocturnal time, as we got back really late and then I pretty much slept all day got up had an espresso and went to training hence writing this at 4am. Sleep is an important part of recovery so its back to a caffeine ban again from tomorrow, well today!


Thanks to my coaches Paul and Tolly and all the guys at 1st gen that helped me get ready especially joe, mikey and lee, and the crossface guys for nurturing some extra aggression in my game. Cheers to my sponsors Punchtown who hooked me up with some really nice sparing gear that made me feel extra bad ass in training.
Last fight of the year will be 11th December on KAYO MMA show in Watford then its time to focus on Jiujitsu again to be ready to rock the Euro's at the end of January.
Saying that I can't believe this year has gone so quickly but I'll save those thoughts for another post and leave you with some pictures of my new bling. 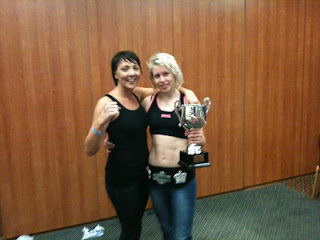 Posted by XOXrachyXOX at 19:56 No comments: