I am happy to announce that I won my third MMA fight on Friday night against Kirsty Davis with both rounds scored 10,9.
The fight went exactly how I had planned, and I was able to get the take down from the clinch and against the cage and remain in a dominant position. I worked for the submissions for both rounds, which essentially prevented my opponent from using any of their "stand up" technique.
This resulted in my opponent commenting that they were disappointed they had not got to fight properly, they didn't realize they had signed up for a grappling match and also that it was the easiest fight they had ever had. They also threw in that as I was a blue belt I should have been able to submit a white belt.

Lets look at this from a different perspective, say my opponent had spent the 2 rounds hammering me with punches and kicks and I had just moved around and covered up, essentially avoiding them from knocking me out.
I couldn't say this would be something I would be particularly proud of or use as bragging rights to help soften the blow of defeat.I also wouldn't make claims like, "I didn't know this was a kickboxing match" If it was my lack of ability to keep the match where I wanted that resulted in me not getting to show off any of my grappling skills.

I was also surprised that the fight was mainly fought on grappling terms, as I expected my opponent to perhaps try to punch or kick me throw a knee in the clinch?
Oh well you live and learn and I took away lots of positive things from the fight.
As I have always said grappling with girls is a lot different as they have a much better range of motion and are good at escaping as they are often on the receiving end when training with bigger stronger guys.I will keep travelling to train with other girls to work on that aspect of my game but I am happy with how I am progressing.

I am sorry if this seems like a bitchy post and I hate getting drawn into petty arguments but I think as a fighter its important to be able accent and learn as much from defeat as from victory.
I have respect for anyone that gets into the cage to fight as its no laughing matter and takes lots of guts but don't do it if your not prepared for what another fighter is going to bring to the table! 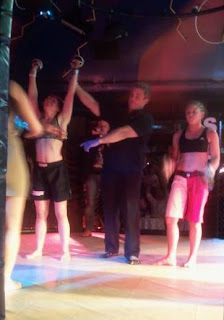 Posted by XOXrachyXOX at 13:42 No comments: